Would I, Could I, Should I Write a Memoir?

Even before you finish writing your book, you need to be reaching out to your future readers. Whether you intend to go the traditional, or independent publishing route, you will have to build a following. As the founder of She Writes Press, Brooke Warner told me when I was shopping for a publisher, “Unless you have 5,000 friends on Facebook, I won’t even read your manuscript.”

Find out how to reach your readers during Part Two of this overview course. You can take the 4 weeks of Part Two without taking the first 4 weeks of Part One. Seating preference is given to those who have done Part One. The course will be offered again next semester.

Bring all your questions and concerns about the marketing, sales and distribution side of becoming a successful memoir author. You will get your answers and learn how to formulate a strategy that will work for you, your book, and your budget. The pandemic continues to accelerate changes in the publishing industry. These are particularly relevant to the marketing of memoirs.

Attendance is limited to ten people, so reserve your spot today. We will meet live via Zoom for four consecutive Monday evenings 7-8:30 pm EST

Instructor: Cynthia F. Davidson, is the IPPY award winning author of The Importance of Paris. She began teaching this course around her dining room table in 2019 after people asked how she’d managed to do it. A former CBS News journalist, she recently won First Place in the LifeWriting contest. You can read that piece here. It is part of her next memoir. https://www.storycircle.org/the-forty-year-journey/

Contact https://cynthiafdavidson.com/contact-cynthia/ for more information. You can join one of her on-going memoir writing facilitation groups or arrange to work with her one on one.

More than 80% of Americans believe they ought to write a book but few manage to achieve this goal. What makes the difference, between those who finished writing, editing and publishing a book and those who did not is:

A born mystic, Cynthia was raised in Arabia. There she began taking divine dictation at age 10, penning her first poems.

After studying the perennial teachings, she developed The Wisdom Wheel, and decided to leave corporate life. She relocated to Rhode Island to create a spiritual retreat center, where she has taught and led ceremonies, for the past 20 years.

The Importance of Paris is the first in her planned series of memoirs. The book won an IPPY (Independent Publishers Award) in 2019. Available on Amazon in eBook, Print and Audio, it recounts her years living in more than one Paris. Cynthia came of age in the former Paris of the Middle East, Beirut, Lebanon. When war erupted there in 1975, her sister was shot and her father kidnapped… Desperate to understand why the country she loved had disintegrated, she went to Paris, France for answers, since Beirut remained too dangerous to return to. Her quest to understand the reasons behind the violence led her to another woman whose husband had been assassinated in Lebanon.

“It took me a long time to tell my own story,” admits this former CBS News journalist. “My focus had been on telling other peoples’ stories.”

THE IMPORTANCE OF PARIS 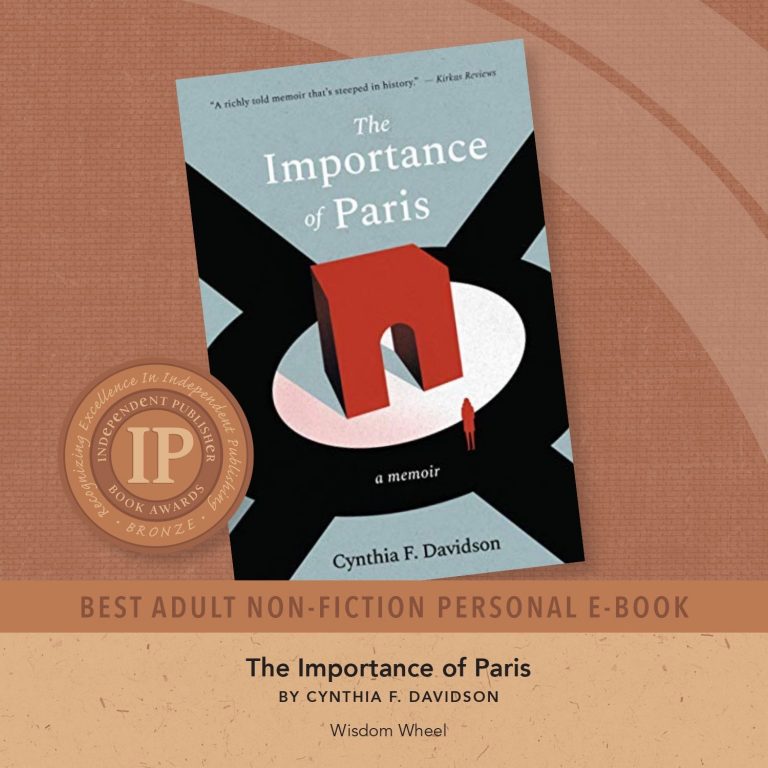 ‘Davidson’s belief that historical knowledge is the key to understanding contemporary problems results in a well-told, jet-setting memoir that spans decades and continents. The book is rather lengthy, but its seamless digressions will keep readers’ interest as Davidson recalls important years in her journey toward psychological and spiritual well-being. A vibrant parade of people moved in and out of her life, and her stories range in tone from joyful to harrowing. She also offers considerable cultural and political insight, and a little bit of romance, along the way, as well as an intriguing take on Paris as a place of refuge and healing. – Kirkus Review

Paris has a soul and she’ll test yours.
Will you sell out or stay true?

Seekers of transformation have been flocking to the City of Light for centuries: artists, mystics, writers, revolutionaries, royals, and refugees. And twenty-seven million tourists a year were making Paris the most visited place in the world when I went there for a ten day vacation in January 1984. A month later, I put my affairs in order and returned, to become one of the two million who call Paris home.

My home had once been in another Paris, the “Paris of the Middle East” Beirut, Lebanon. Having come of age in that former Levantine colony of France, I believed I belonged there. But shortly after I turned twenty-one, Lebanon devolved into a gaping, bleeding war zone. Those of us who witnessed its demise can hardly believe the Beirut we knew is gone. The promise of its heydays lives on in our memories.

During the two decades of my most formative years, my family made our home in the Middle East, although we had all been born in the US. My American expatriate parents might have stayed in their Beirut apartment if Lebanon had not become another casualty of man’s inhumanity.

The Lebanese Civil War almost finished us: my sister was shot in Beirut, my father kidnapped, our apartment looted, and friends disappeared. Some were tortured and killed. Worse yet, some became torturers, killers, and black market profiteers. While others have the luxury of ignoring what went wrong in Lebanon, we who lost everything familiar there crave a decent explanation for its disappearance.

The nightmare of that faux Paris still had me in its thrall when I moved to France at age twenty-nine, determined to discover what had gone wrong in Lebanon. The ongoing fighting made it too dangerous to return to Beirut for answers. After the invasions of the Syrian and Israeli armies, my parents finally gave up and returned to America in the summer of 1982, after twenty-one years in the Arab world. Each member of my family struggled to readjust to life in the US after being abroad for so long. In addition to what was lost in the fighting, we had also lost our foothold in the world at large, and this wreaked havoc on my sense of belonging and identity.

Thoughts of Lebanon’s ruination preoccupied me. As the war raged on during my twenties, I dreaded having turned my back on a place and a people when they needed their friends the most. I didn’t know my grieving process had a label, and a form of treatment, until years afterward when the term “post-traumatic stress disorder” came into vogue. Desperate to draw conclusions and be done with the torment, I decided the best way to come to terms with the war was to find out what had caused it.

That meant finding someone with deep knowledge of the how and why. Only survivors had any credibility with me. Who else could be trusted to explain the reasons behind such devastating violence? Furthermore, it had to be a Lebanese national who had been there, not some foreign analyst, or a pundit with an agenda. Sure a local person was better qualified to tell the world what had gone wrong in Lebanon. If my country, the US, had fallen apart in a civil war, I would want a fellow citizen to explain the lived truths of our story.

Apart from nationality, I wanted to hear it from another woman. And I chose Georgina Rizk. Not because she had once been Miss Universe, but because the multiple tragedies she had endured since wearing that crown had left her fatefully suited to the task. Her involvement with people from opposing sides of the conflict had transformed her into a cipher, with insights from more than one perspective. So I put my faith in this search for the truth, via another person, without fully realizing the risks of such a plan. Nor did I comprehend the limits of logical, factual quests, which rarely repair our hearts or restore trust, in others or ourselves. My psyche steered me towards a female survivor, and a French city, each with their own experiences of wars and healings. Living in Paris put me through a process as peculiar as it was unexpected. And although my three-year cure in France came close to killing me, this memoir is a testament to how Paris managed my transformation. Vive la difference.

Beautiful, insightful memoir set against a backdrop of Lebanon and Paris

“This is a gorgeously written memoir that features a young American woman who comes to better understand herself and the world, while living and then working abroad. In her desire to write an account of Lebanon, which includes the Arab world’s first and only Miss Universe, the author comes to makes sense of how attachment to people and place can determine the course of our lives. Davidson’s writing beautifully illustrates her own struggle to better understand how history creates and shapes us, and how ultimately—and sometimes bravely—we can shape our own. Plus, it’s set in Paris…”

“You cannot contribute anything to the ideal condition of mind and heart
however much you preach, posture or agree, unless you live it.“